The best way to counter Lucian is to pay attention to his ult at level six. Lucian can use his ultimate while he moves. He can use it to kite and deal damage to you.

Lucian’s damaging abilities all have a long-range, but they are skill shots. The key to winning against him is to have good awareness and dodge his abilities.

His Q passes through minions, so it’s best to stay at the side to avoid unnecessary damage. For instance, if Lucian is on the left side of the creep, stand on the left as well to prevent his Q from damaging you.

Caitlyn is a good ADC and can lane against Lucian with ease. Her long auto-attack range lets her poke Lucian while remaining safe.

Kalista can kite Lucian in a 1v1 trade. She can also deal a lot of damage using her Rend. Her passive ability also counters Lucian’s ultimate. 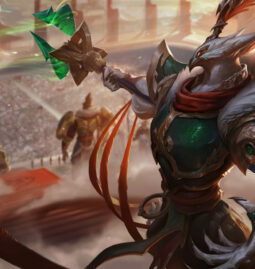 Read More
To counter Brand, avoid being near targets of his ultimate. His ult can bounce from one teammate to the next. In fact, Brand has many area of effect abilities, so it is best to avoid being in groups …

Read More
To counter Pantheon, pay attention to where he is about to land. You can cast skill shots in that direction to bind/stun him. Get free League of Legends skins, RP, Essence, Little Legends Eggs, all with Twitch Prime, …